In her paintings Ragna Berlin juxtaposes sensuous ovoids floating in an indeterminate space. There is a subtle relationship between these biomorphic shapes, next to each other, and between the shapes and the background. The colors are vibrant and radiant, yet not clear and final, and the surface is activated by the painted veils and the shadows, creating a texture that turns the essentially flat shapes into strong three-dimensional volumes. The differences in hue and weight of the colors add to the strong tactical qualities of the biomorphs, as they seem to move slowly across the surface, vibrating as they lie close to each other. The canvases have no single predetermined orientation, but can be turned around and thus achieve a new peaceful balance or even imbalance as the surprisingly strong movements take off in different tangents.

Berlin’s paintings can be looked at from a strictly formal point of view, but the abstract compositions are also bearer of meaningful intimate communication. In their transcendental qualities the canvases recall a high modernist idiom, her own version of color field painting close to the mysterious sublime of Barnett Newman and Mark Rothko. But apart from the similarities on the level of the sublime, there is also a strong sense of humor in Berlin’s paintings, allowing for suggestive interpretations.

This jocose vein of Berlin’s œuvre becomes obvious also in the relationship between the canvases and the installations of painted biomorphic dots in the gallery space itself. Here, Berlin occupies the corner of a room: while defining or reconfiguring space, her monochromatic painting simultaneously dissolves boundaries. Standing in a position right in front of the painting, it shows as the perfect sphere, again floating in indeterminate space, but it could also be read as an illusion of a hole in the wall. Moving back and forth, or moving from one side to the other, the shape is distorted and an amorphous blob is produced. Thus the paintings on the wall are disturbing, yet peaceful, just like the canvases, as they create an effect of formlessness or even of a void. 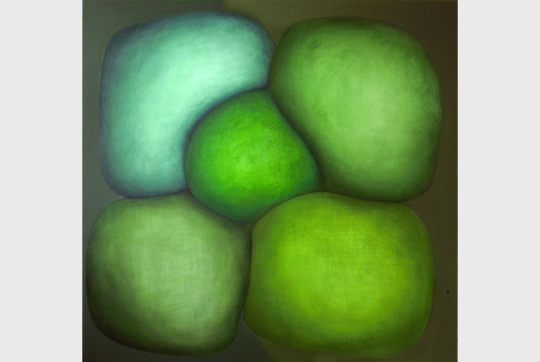